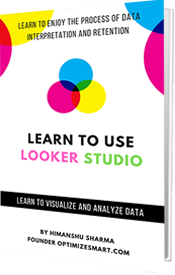 If you want to do any type of data manipulation (whether it is aggregation, mathematical calculations, manipulating string data, etc) then do it in Google Sheets and not in Looker Studio.

Looker Studio is not a spreadsheet. It is designed to visualize data not to manipulate it

# Looker Studio is not meant for data manipulation.

Looker Studio is not a spreadsheet. Sure, it provides formulas and functions for manipulating data but their use can significantly slow down your reports especially when you have got a large data set.

For example, if you have a larger (20000+ rows per day) data set that contains the revenue and discount. Now if you use Google Sheets to calculate the net profit you can use simple Excel formula and it will be done very quickly. In the case of Looker Studio net profit can also be drawn using calculated fields but it will take some time when you view the report and the data range is more than a month.

# Manipulating data in Google Sheets is far easier than manipulating the same data in the Looker Studio.

Google Sheets is specifically designed for data manipulation. It is a spreadsheet and you can use Excel formulas to perform calculations, data blending. You can also use multiple Google Sheets tabs to join data and then use it for analysis purposes.

In the case of Looker Studio, you can use multiple sheets but data blending especially where you want to join data sources is a very difficult and complex process.

# When you choose to do data manipulation in Looker Studio, you unnecessarily make Looker Studio hard to use.

The more calculated fields and functions you will use in Looker Studio, the harder it would become to debug reporting issues.

# When it comes to data manipulation there is almost nothing that Looker Studio can do but which Google Sheets can’t.

# When it comes to custom automation Google Sheets has more capabilities than Looker Studio.

In the case of Looker Studio, it has limited custom automation abilities.

For example, when you are dealing with boolean data in Looker Studio, you have no choice but to use the calculated field. As Looker Studio does not recognize boolean values used in Google Sheets as of type ‘Boolean’.

Wherever possible, minimize the use of calculated fields in your data source schema and reports.

Other articles on Looker Studio