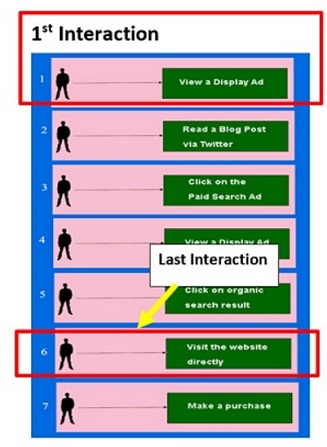 Each exposure is known by the name of ‘interaction’ in multi-channel funnel reports.

Note:  Google Analytics can record up to 5000 interactions per conversion path.

There are several types of interactions. For example: 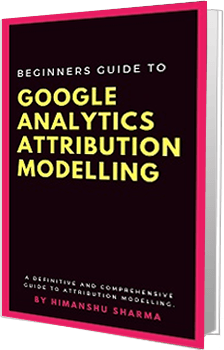 In Google Analytics you can do two types of interaction analysis: 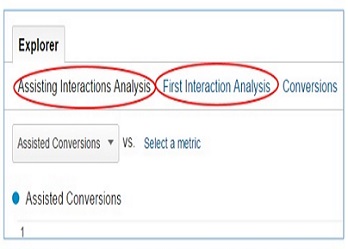 You can do such type of analysis in the ‘Assisted Conversions’ report (under Multi-Channel Funnels).

If you have enabled GDN impression reporting, not only you will see the ‘Interaction Type’ drop-down menu in your multi-channel funnel reports but you will also see a new set of interactions types in the ‘Top Conversion Paths’ report: 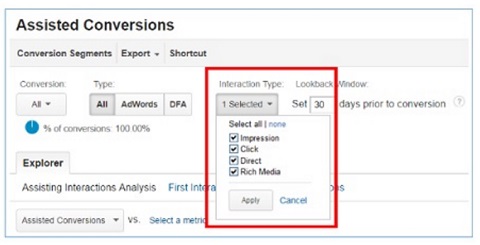 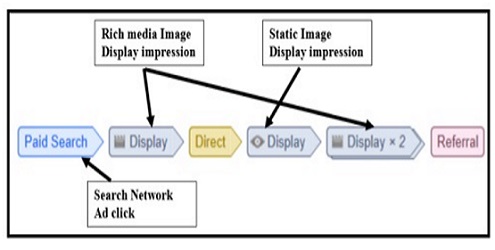 #3 ‘Direct’ Interactions/Touch Points – it refers to unclicked non-text display ad impressions which resulted in direct conversions on your website.

#4 ‘Rich media’ Interactions/Touch Points – it refers to the following types of interactions:

To learn more about these interactions types, read this article: View-through conversion tracking in Google Analytics

Not All Touch Points Are Equally Valuable

The exposure to a marketing channel during the path to conversion is known as interaction, touch or touchpoint. 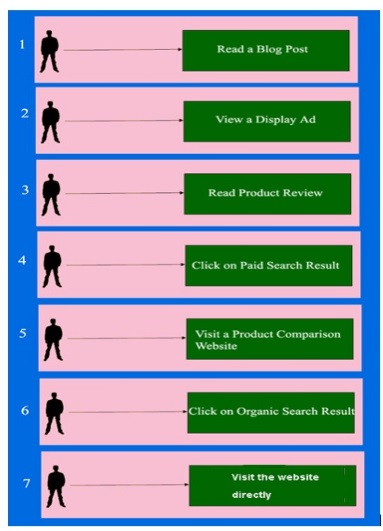 Here I am exposed to 7 different acquisition channels before I made a purchase. Since each of this exposure is considered as a touchpoint, there are 7 different touchpoints in my conversion path.

Now let us see how credit for the conversion is distributed to different touchpoints under different attribution models: 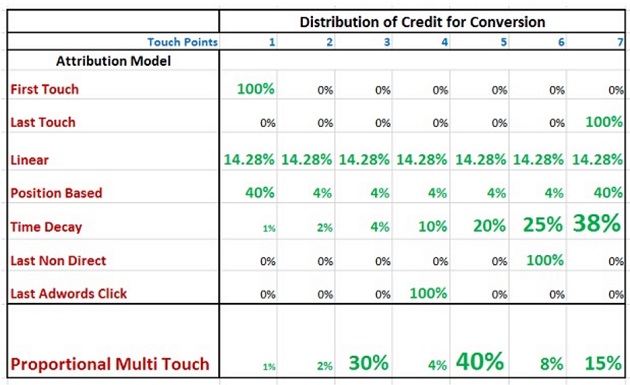 As you can see 6 other acquisition channels have also played an important role in my path to conversion.

In the case of the Linear attribution model, all touchpoints get equal credit for the conversion. So according to the linear model, all 7 touch points are equally important in my path to purchase. But this is also not true.

I read product reviews and went to the product comparison website before making a purchase. These two touches were more valuable to me than the exposure to the blog post, display ad, PPC ad and organic search listing as they played a very important role in my purchase decision.

Had I not been satisfied with the product review or pricing, I wouldn’t have made the purchase in the first place.

In the case of the time decay model, the touchpoints which are closest in the time to conversions get more credit.

So according to the time decay model, my exposure to an organic search result and visiting the website directly should get more credit than to my exposure to product reviews and pricing.

Get my best selling books on Attribution Modelling

Again such type of credit distribution is not accurate as had I not been satisfied with the product review or pricing, I wouldn’t have made the purchase in the first place.

The time decay model is the modified last touch attribution model. Although it is crappy, it is less crappy than the last touch and other GA models.

One issue worth pointing out about giving more credit to last touches/interactions:

Last interactions act as a last point of contact prior to purchase. By the time a customer experience last touches to marketing channel(s), a purchase decision has already been made. So it doesn’t really matter which channel closed the sale when it comes to allocating budget.

In the case of the Proportional Multi-touch attribution model the credit is distributed to touches in proportion to their contribution in the conversion.

The acquisition channel which assists the most gets the maximum credit for conversion and maximum resources are allocated to it regardless of it being the first touch, last touch or middle touch.

All other touches would get credit in proportion to their contribution to the conversion path.

So according to this model, exposure to product review and product comparison websites get more credit for conversion than all other touchpoints as they played a key role in the decision-making process and my purchase journey.

The Concept of Missing Touchpoints in Conversion Paths

Google Analytics provides the best attribution modelling capabilities in the world but it has its own drawbacks.

You need to be aware of following limitations before you interpret GA multi-channel funnel and attribution reports:

#2 Both Google Analytics and Google Adwords, record and report attribution for only online touchpoints.

#3 Both Google Analytics and Google Adwords, do not record and report attribution for ‘all’ digital marketing channels

#4 Both Google Analytics and Google Adwords, do not record and report attribution across devices and browsers

If you wish to minimize the number of missing touchpoints in your conversion path, you need to integrate as much data as possible from different data sources.

To learn more about the concept of missing touchpoints in a conversion path, read this article: Understanding Missing Touchpoints in Attribution Modelling

(even if you are completely new to analytics)


Here’s what we’re going to cover…

Himanshu helps business owners and marketing professionals in generating more sales and ROI by fixing their website tracking issues, helping them understand their true customers' purchase journey and helping them determine the most effective marketing channels for investment.

He has over 12 years of experience in digital analytics and digital marketing.