The use of different attribution models alone can create a discrepancy in conversion data between Google AdWords and Google Analytics.

In Google Analytics, all the AdWords conversion paths (keyword path, ad group path, and campaign path) are based only on clicks.

Whereas in Google AdWords, the AdWords conversion paths are based on both clicks and impressions.

The Goal conversion rate in GA is based on the Goals you have defined for a particular view and the sessions recorded for that view.

So filtered views can create huge data discrepancy between AdWords and analytics.

The goal conversion rate in AdWords is based on the Goals you have defined via AdWords conversion tracking code or the goals you imported from Analytics and the clicks/video views recorded for the goals.

In Google Analytics, a goal completion is counted only once per user session.

Whereas in Google AdWords a goal completion can be counted many times per ad click.

So if a file download is one of your goals then google analytics will count only one file download as a goal completion in a given session no matter how many times a user downloads the file in the same session.

Whereas in AdWords, if file download is one of your goals then Google AdWords can count goal completion each time the user downloads the file after an ad click, even in the same session.

In AdWords conversion tracking, there is no concept of user sessions.

Whereas Google AdWords count only those conversions which resulted from AdWords ad clicks/video ad views. 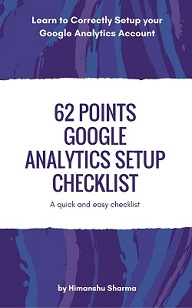 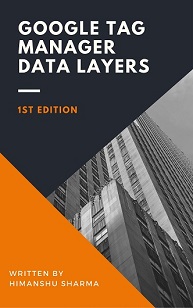 In Google AdWords, you can count conversions according to your business and marketing goals through flexible conversion counting.

So for example, if you want to track sales, then you would prefer to count every sales/transaction that happened after a click on your ad. Consequently, you will set your count option to ‘Every’ while setting up a conversion in AdWords: 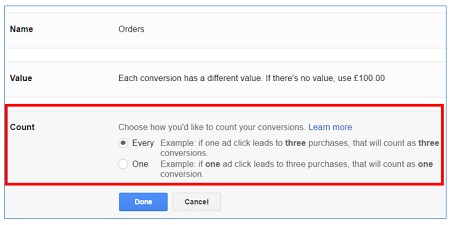 If however, you want to track leads, then you would prefer to count only one lead conversion that happened after a click on your ad (unique leads).

Consequently, you will set your count option to ‘one’ while setting up a conversion in AdWords: 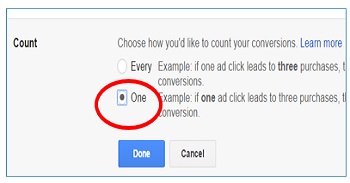 Google Analytics does not provide flexible conversion counting, which can create a difference between AdWords and analytics goals data.

Because of the flexible conversion counting feature of AdWords, there is a possibility that certain transactions that are recorded in Google Analytics are not recorded and reported by AdWords.

For example, if a user clicks on an ad and then place two different orders, then Google AdWords may report only one order (if the conversion count is set to one) whereas Google Analytics reports two orders.

Reverse transactions – in Google Analytics, you can reverse a transaction which is not possible in AdWords.

Refund data – in Google Analytics you can import refund data which is not possible in AdWords.

Google AdWords can discount invalid clicks and all the conversions which occurred as a result of such clicks.

This is not the case with Google Analytics. GA can still report on the conversions resulted from invalid AdWords ad clicks.

Google Analytics and AdWords can report the same conversion on a different day and time.

Google analytics report conversion on the day it happens.

Whereas Google AdWords report conversion on the day, the ad was last clicked prior to conversion.

Let’s say someone clicked on your AdWords ad on July 1 and then made a purchase on July 2.

Now both Google AdWords and Google Analytics will not report any conversion on July 1.

However, on July 2, Google analytics will report the conversion.

Conversions recorded via AdWords conversion tracking code are updated faster in AdWords (usually within 3 hours) than the conversions imported to your AdWords account from Google Analytics.

The imported conversion data can take up to 9 hours to reflect on the AdWords reports.

Because of this reason, the conversion data between AdWords and analytics can be temporarily out of sync.

There are certain categories of conversions that can not be tracked in GA at present.

For example, the following AdWords conversions can not be tracked in GA at present:

#1 Cross-account conversions – these are the conversions that resulted from your ads created in multiple AdWords account.

#3 View-through conversions – conversions that resulted from the viewing (impression) of your video/display ad.

For example, a person saw your ad (but not clicked it) and then later completed a conversion on your website, which can be counted as a view-through conversion in AdWords.

For example, a person clicks on your ad, on one device and then later completed a conversion on your website via a different device, which can be counted as a cross-device conversion in AdWords.

#5 Cross browser conversions – the conversions which resulted from an ad click on a different web browser.

For example, a person clicks on your ad, on one web browser and then later completed a conversion on your website via a different web browser, can be counted as a cross-browser conversion in Adwords.

Cross browsers conversions are included in ‘All Conversions’ in AdWords and are not reported separately.

#6 Store visits conversions – the conversions which resulted from a visit to your physical store (shop, hotel, restaurant, etc) after a click on your AdWords ad.

Do you know the difference between Web Analytics and Google Analytics?

So they are teaching GA and GTM in the name of teaching Web analytics.

They just copy each other. Monkey see, monkey do.

But Web analytics is not about GA, GTM.

It is about analyzing and interpreting data, setting up goals, strategies and KPIs.

It’s about creating strategic roadmap for your business.

You can also implement ‘Web analytics’ via other tools like ‘adobe analytics’, ‘kissmetrics’ etc.

Using Google Analytics without the good understanding of ‘Web analytics’ is like driving around in a car, in a big city without understanding the traffic rules and road signs.

You are either likely to end up somewhere other than your destination or you get involved in an accident.


You learn data analysis and interpretation from Web analytics and not from Google Analytics.

You get that direction from ‘Web analytics’ and not from ‘Google Analytics’.


You learn to set up KPIs, strategies and measurement framework for your business from ‘Web analytics’ and not from ‘Google Analytics’.

Since any person can learn to use Google Analytics in couple of weeks, you do no get any competitive advantage in the marketplace just by knowing GA.

You need to know lot more than GA in order to work in Web analytics and marketing field.

So what I have done, if you are interested, is I have put together a completely free training that will teach you exactly how I have been able to leverage web/digital analytics to generate floods of news sales and customers and how you can literally copy what I have done to get similar results.

Here what You'll Learn On This FREE Web Class!

1) Why digital analytics is the key to online business success

2) The number 1 reason why most marketers are not able to scale their advertising and maximize sales.

3) Why Google and Facebook ads don’t work for most businesses & how to make them work.

4) Why you won’t get any competitive advantage in the marketplace just by knowing Google Analytics.


5) The number 1 reason why conversion optimization is not working for your business.

6) How to advertise on any marketing platform for FREE with an unlimited budget.

7) How to learn and master digital analytics and conversion optimization in record time.

Himanshu helps business owners and marketing professionals in generating more sales and ROI by fixing their website tracking issues, helping them understand their true customers purchase journey and helping them determine the most effective marketing channels for investment.

He has over 12 years experience in digital analytics and digital marketing.

He was nominated for the Digital Analytics Association's Awards for Excellence.

The Digital Analytics Association is a world renowned not-for-profit association which helps organisations overcome the challenges of data acquisition and application.