The following article is an excerpt from my best selling book: Maths and Stats for Web Analytics and Conversion Optimization which I am sharing here for the first time, to benefit the wider audience:

Nobody wants to be average and yet we all love averages. That is why our analytics reports are all jam-packed with averages: 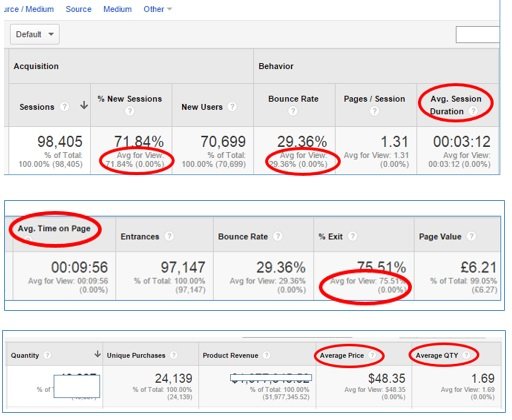 In order to analyze and report above average, we would first need to stop being obsessed about all the metrics which are ‘average’ and take the insight they provide with a huge grain of salt.

Any set of measurement has two important properties:

We calculate the central value with the aim to determine a typical value in a data set.

A data set is a set of observed values for a particular variable (say avg. time on site).

We measure the spread with the aim to determine how similar or varied the set of observed values are in a data set.

We calculate the central value through Mean, Median and Mode.

We measure the spread of data values through Range, Interquartile Range (IQR), Variance and Standard Deviation.

The mean (also known as arithmetic mean or population mean) is simply an average of the numbers. It is denoted by the Greek letter µ (“mu”).

It is calculated as

For example, let us suppose a website has got 5 web pages: 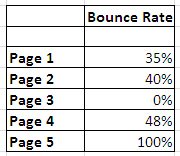 No. Look at the distribution of bounce rate across all the web pages. Two web pages, page 3 and page 5 have extreme values of 0% and 100%. We call such values ‘outliers’ in statistics.

Outliers have the sadistic ability to skew ‘averages’. 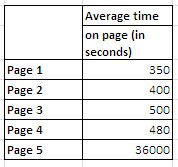 But is ‘2hrs 6 minutes’ a true average time on a page?

No. Look at the distribution of average time across all the web pages. The web page ‘page 5’ has extreme values of 36000. Again, the outlier ‘36000’ is skewing our average metric.

This is the fundamental problem with averages and the tragedy is that Google Analytics uses this metric throughout its reports: ‘Average time on page’, ‘average time on site’, ‘site average’…..You can’t really escape from ‘averages’.

As long you keep analyzing and reporting these average metrics you will get average results.

So what is the solution then?

It is a middle number in a sorted list of numbers.

For example, let us suppose a website has got 5 web pages:

If we calculate the median (instead of the mean) of this data set then it will be 40%.

Now is 40% a true representative of a typical bounce rate of the site?

Now is 480 seconds (or 8 minutes) a true representative of a typical time spent on a web page?

Yes. This is because, unlike the mean, the median (or middle value) is not impacted by outliers (in our case: 36000)

You can always download Analytics data/report into excel and calculate the median of any data set (n matter how large) through MEDIAN excel function.

However, calculating the median of each and every data set all day long can be very time consuming and not practical for many.

So what is the solution? The solution is, you first measure the spread of the data values in a data set and then decide whether or not you can trust the average value reported by your analytics tool like Google Analytics.

There are two ways of measuring the spread:

1. You look at the distribution of values in a data set, find and eliminate outliers (or extreme values). I use this method majority of the time.

We measure the spread by calculating the ‘Range’ which is simply the difference between the maximum value and minimum value in a data set.

If you look at the chart again, there is one outlier (or extreme value) i.e. 9 minutes and 30 seconds. This outlier is skewing the ‘average visit duration’ because it has increased the value of the range.

If we discount this outlier than the new maximum value would be something like 5 minutes 30 seconds.

So now Range is:

That’s why it is important that we look at the distribution of values, calculate the spread and identify and discount outliers before we choose to trust an average metric/value.

Granted this is not the most accurate way to measure spread and determine the central value but it is practical and works esp. when you have to look at hundreds of reports day and night and you don’t have time to calculate median or spread through IQR.

Look at the distribution of ranking positions:

If you are ranking from position 2 to 3rd+ page (or better say position 2 to 30+ position) for a search query then you can’t rely on an average value. This is because the range of ranking positions is too large.

If you won’t measure the spread of data values you will never know whether or not your average value is a true representative of the typical value in a data set.

That’s why it is important that you calculate both the central value and the spread of the data values.

Note: You can calculate range in excel by using the formulas Max and Min.

2. The more difficult and time-consuming way of calculating spread is through IQR, variance or standard deviation.

If you have a very large data set with a lot of outliers than you can’t depend upon the visual method I explained above to determine the spread of data values. You then use IQR, variance or standard deviation to calculate the spread.

I recommend using IQR because it is a better measure of a spread than the range or standard deviation as it is less likely to be distorted by outliers.

So you calculate the IQR and then decide whether you can rely on the average value reported by your analytics tools.

A quartile is one of the four equal groups in which a data set can be divided. For example, consider the following ordered data set:

Here the point between the lowest 25% of the values is called the 25th Percentile or the lower Quartile. The lower quartile is denoted by Q1

The point between 50% of the values is called the 50th Percentile or the second Quartile. This second quartile is actually the median. So median is also denoted by Q2

The point between the lowest 75% of the values is called the 75th Percentile or the Upper Quartile. The upper quartile is denoted by Q3.

The difference between the Upper quartile and lower quartile is called the Interquartile Range.

In Excel 2013 there is a function called QUARTILE through which you can calculate Q1, Q3 and eventually IQR.

Here ‘array’ is the range of cells that contain the data set.

‘Quart’ is the parameter that is used to specify which quartile to return.

It can have three values: First Quartile, Median Value and Third Quartile as shown below:

Through the QUARTILE function you can calculate the first and third quartile. Once you have done this then find IQR using the formula Q3-Q1:

The data values that deviate from the middle value by more than twice the IQR are called outliers.

The data values that deviate from the middle value by more than 3.5 times the IQR are called ‘far outliers’.

In order to get a better understanding of how IQR works, you must know how it is calculated manually.

Another powerful method to reduce the negative impact of ‘average’ metrics on your analysis and business decision is ‘Data Segmentation’.

Segment like Hell. The more you will segment the data, the smaller will be the data set and the data values will be more close to the mean or average value.

In layman language, the more you will segment the data; the more accurate your average metrics will be.

Like it or not but you learned a lot of statistics in this post to fight averages.

In order to become above average in marketing or analytics, you need to learn even more statistics.

“Analyzing data without a basic understanding of statistics will always almost result in erroneous conclusions. “ – That’s my theory

I have proved this theory time and again in my posts:

I can’t stress enough the importance of statistics and its supersets econometrics and data science in solving real-life problems.

Let me give you one good example.

According to the law of diminishing marginal utility, the first unit of consumption of a good/service produces more utility than the second and subsequent units.

This means the very first article that you will read on a topic say ‘Google authorship’ will produce more benefit than second and subsequent articles on the same topic.

So more articles you will read on ‘Google Authorship’, the less you will benefit from it.

Then soon you will reach the point of diminishing returns and once you crossed this point, your efficiency will start decreasing and you will be less productive.

Needless to say, in our industry, every new shiny thing/topic (from Pinterest to Google Authorship) is tortured to death in the name of blogging and thought leadership and we tend to read every new article on the same topic in a hope to gain something new.

But at the same time, we forget how the law of diminishing marginal utility is making us less and less productive with each additional unit of consumption.

Reading more will give you less time to do more and if you do less and read more than you will learn less.

So here we go. I just applied the law of diminishing marginal utility in solving a real-life problem (increasing productivity) and saving you countless hours.

Other articles on Maths and Stats in Web Analytics